I run across these random tips for various social media channels quite a bit. So I decided to start a post dedicated to them.

Twitter Tip 101: Use hashtags & links together. Tweets with hashtags+ links outperforms Tweets with just one or another. 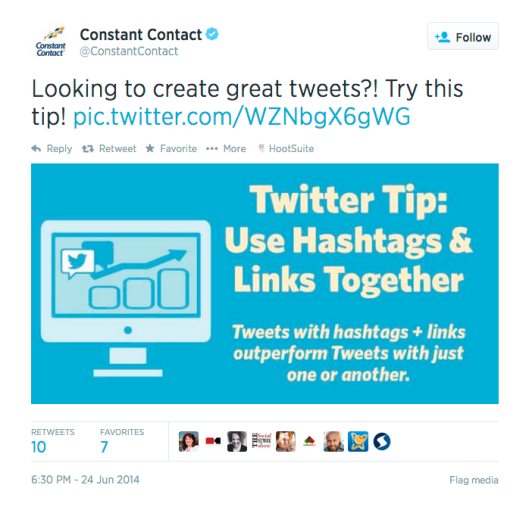 Hashtags first started out on Twitter and have made their way onto all of the most popular social networks including Facebook, Pinterest, Instagram and Google+. A hashtag is a symbol used to mark a certain category on social media.

The use of a Hashtag in a strategic way can be effective when creating popularity around your brand or business. Finding relevant conversations and interesting people to follow is one of the key uses of hashtags along with increasing engagement.

It is important as a business to understand why hashtags are so important, especially onTwitter. Below you can see some great statistics around how hashtags improve a business’s online interaction when it comes to Twitter.

Hashtags have become somewhat of a trend which isn’t necessarily a good thing if a user doesn’t understand why they are using a hashtag and the reason behind why they are so powerful. Here are three benefits to using hashtags;

Using the right hashtags when trying to build engagement can increase your following extensively over just a few days.

If you show expertise when using a hashtag to start a conversation, people will see you as an influencer and follow you because of your reputation.

Searching the right hashtags will allow you to find vital information on an subject matter.

When using hashtags on Social Media, they can lose their value if not used correctly. Hashtags should have a purpose whether it is to increase engagement or following, their is always a reason. Below are 5 uses of hashtags that you should be aware of.

The whole idea behind a hashtag when using one is to make sure it is not to obscure or too long. Remember that a hashtag is only effective is people are actually using it. If it isn’t popular enough, it won’t help you boost your profile however you don’t want your post to get lost if your hashtag is too popular.

It’s great if you are using hashtags and you understand why you are using them but you also need to make sure you measure conversions and by this I mean making sure that you are using the right hashtags. If your key performance indicators (below) have not increased since you have changed your hashtag strategy, you might need to revise your plan.

If you don’t know how to measure the above KPI’s, you can use hashtag applications and social analytical tools to measure your businesses performance. To see how certain hashtags are performing in general, you can follow the conversations yourself or Google the specific hashtag to see how it is performing.

I hope you now know how to use hashtags to increase your social media presence.

I have posted something similar way back when, but as the use of Twitter and hashtags has, like most other social media channels grown over the last couple of years, it is worth posting again.

Now I make no claims to being a Twitter/Hashtag expert, far from it. So in lieu of actual hands on information, I have gathered the best information I could find on the subject. So a special thanks to the folks at Hashtag.org for helping a girl out!

A hashtag is simply a phrase or keyword that is preceded by a pound (#) symbol and used by the micro-blogging community to create a thread of conversations around a specific theme or topic.

The purpose of the hashtag is to categorize topics, bring ideas together, inspire exchange and encourage others to join in. And because the conversations under hashtags, or any other part of the social networking community for that matter, are not regulated, micro-bloggers have more freedom to express what they want.

This is why hashtag usage is very popular in the likes ofTwitter, Instagram, YouTube, Pinterest, Google+ and other social networking platforms that read hashtags. You can find a list of the most popular hashtags at certain times atHashtags.org.

You only need to add a # before a word to make it hashtag. However, because a Tweet is only limited to under 140 characters, the best hashtags are those composed of a single word or a few letters. Twitter experts recommend keeping the keyword under 6 characters.

Use only numbers and letters in your keyword. You may use an underscore but do this sparingly for aesthetic reasons. Hyphens and dashes will not work.

Hashtags do not support spaces. So if you’re using two words, skip the space. For example, hashtags for following the US election are tagged as #USelection, not $US election.

Don’t Start With or Use Only Numbers

Hashtags like #123 won’t work, so don’t use only numbers. Similarly, #123yo doesn’t work. But numbers are great for recurring events like #conference2012 or #SXSW12.

Be careful with slang

Slang words can mean different things in different countries, so be very mindful about the words you use. Effective hashtags are those that are concise, direct to the point and very relatable across cultures.

For a hashtag to serve its purpose and generate a following, don’t pepper your post with more than two hashtags. Overuse is annoying and defies general social media etiquette. You don’t want to be accused of being a hard seller, don’t you?

Read more are about hashtags in Why Use Hashtags?

Related Articles You May Enjoy